The RMT Union is reinvigorating our campaign to organise and represent our Interserve members, instructing them to hold special meetings and depot visits for this purpose. Branches are to advise respective Regional Organisers of these dates and the names of nominated lead activists, one per each location, by no later than 18th December 2018.

The union will produce campaigning material highlighting our 6 key demands for Interserve workers which are as follows;

The union will seek meaningful negotiations to address the above issues with Network Rail and Interserve informing them failing agreement this RMT Union will campaign openly at all Network Rail Managed Stations using all means and channels to expose the poor working conditions and oppressive regime our members face and fully intend to ballot members for industrial action on the contract if necessary, in support of our demands.

A meeting will be arranged with NR and with our parliamentary group to ensure a plan is in place which guarantees our members protection of employment, TUPE and all conditions of service should Interserve collapse.

This matter will be placed back before the NEC on the 18th December 2018.

Posted by Waterloo News at 4:58 AM No comments: 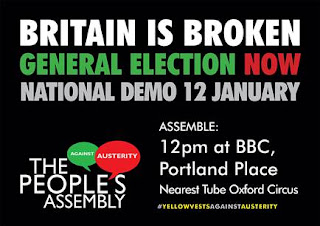 Posted by Waterloo News at 4:53 AM No comments:

To: All Branches & Regional Councils
Dear colleagues
It is with deep regret that I advise of the passing of Lynne Crouch, our Senior Membership Officer, on 30th December 2018.
As you can imagine, it has been both upsetting and a complete shock to all her colleagues and friends following the return to the office after the Christmas break.
As an RMT employee since 2003, Lynne’s passing will be a big loss to our Membership Department and the Union as a whole. Our thoughts and sympathy are with her close friends and family during this difficult time.
Kind regards
Mick Cash
General Secretary
Posted by Waterloo News at 4:52 AM No comments: 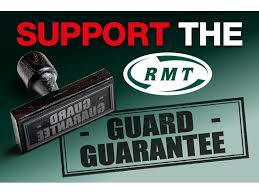 Posted by Waterloo News at 4:43 AM No comments:

I am writing further to my Circular (IR/287/17) dated 10th July 2017 in relation to the above matter and where I informed you of management’s unwillingness to address our concerns and their continued breach of the two sections of the GRA 7.1.1 & 7.2.

Our Lead Officer and SWT Guards Company Council Representatives have recently met with the company to discuss this matter further under the Avoidance of Dispute. In the meeting the issue was raised regarding padding turns utilising spare to move to spare, which was discussed in great detail and debate over a considerable amount of time. It was during this debate last year that the then Customer Service Director agreed that this practice was not within the spirit of GRA and asked the union to provide a clear set of words, which was reflective of everyone’s understanding and interpretation from the discussions.

During the recent Avoidance of Dispute meeting it became clear that the current Customer Services Director believed that on the basis of the information he has received from the previous Director, the form of words provided would likely mean a change to the Terms and Conditions. The union’s negotiating team informed the company that the matter still remains with GRA being incorrectly interpreted by some areas of management and that the form of words provided clarification on the issue and did not require any change to the overall GRA. Despite our best efforts the Director informed us that he would need to talk to First before making any commitments as there could be an impact on the Terms and Conditions of service, which would be affect the change of the franchise rules in the last 12 months.

The National Executive Committee has considered this matter and believes the best possible way forward is to call a ballot for Strike Action and Industrial Action short of a strike. Therefore, ballot papers will be sent to members’ home address on Friday 21st July and will need to be returned by no later than First Post on Tuesday 1st August 2017. I urge you to advise members to ensure their details such as their home address are correct by urgently contacting the RMT Switch board on 020 7387 4771 and asking for the membership department, where their details will be amended. Alternatively, members can contact the RMT Freephone Helpline on 0800 376 3706 or by emailing the helpline at info@rmt.org.uk and notifying them of any updates.

I will of course keep you fully advised of any further developments and future decision on this issue. I would be grateful if you could bring the contents of this circular to the attention of your members.

The Branch has given the supporting nomination to John David for the Company Council Reps (Guards Grades Inner). 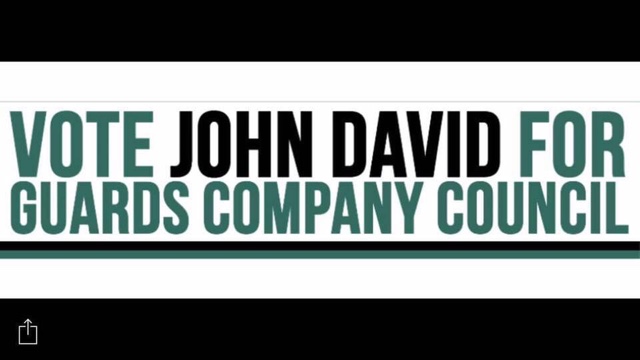 Posted by Waterloo News at 1:05 PM No comments: 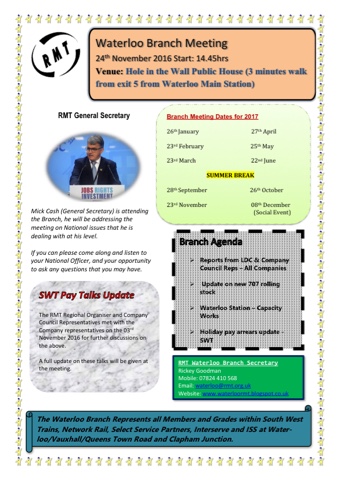 Posted by Waterloo News at 2:18 AM No comments:

The Hole In the Wall Public House

Meet on the 4th Thursday of every Month

Dates of meetings below

Branch Officers that are on Leave will be displayed here

Information on the above will be displayed here>>>>>